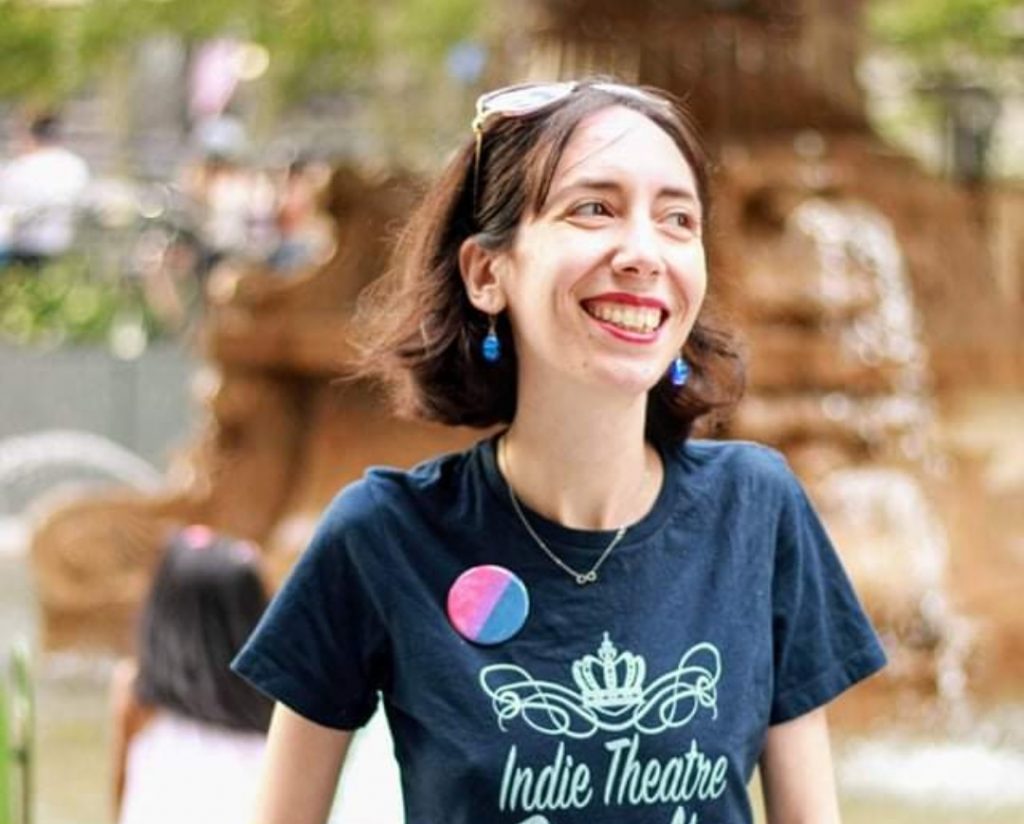 The William Inge Center for the Arts is honored to welcome Gina Femia to Independence, Kansas as our winter 2022 Inge House Playwright in Residence. Gina is the 2022 William Inge Theater Festival Otis Guernsey New Voice in Playwriting Award-winner and will receive the award at the 39th Inge Festival April 21, 2022.

The William Inge Center’s playwright residency, now in its second decade, provides playwrights the opportunity to write and develop their new plays in the same surroundings that inspired young William Inge to his Pulitzer Prize–winning work. Playwrights live in William Inge’s childhood home, and are invited to an extended stay in Independence, to write, create, and to engage with the community in ways that reflect the playwright’s artistry.

Gina’s work has been seen and developed at MCC Theater, Playwrights Horizons, EST, Page 73, New Georges, CTG, Theater of NOTE, Panndora Productions, among others. Selected honors include The Kilroys List, Leah Ryan Prize, Doric Wilson Award, the Otis Guernsey New Voices Award and the Neukom Award in Playwriting. Gina’s work has been nominated for a Drama League Award (my pierced ears with AFO’s Solo Shorts) as well as a New York Innovative Theater Award. Gina is a current Core Writer with the Playwrights Center, and an Alum of EST Youngblood, Page73’s Interstate 73, Pipeline Theatre’s PlayLab, New Georges’ Audrey Residency, the Ingram New Play Lab at Nashville Rep and Parsnip Ship’s Radio Roots Writer’s Group. She is a New Georges Affiliated Artist, and has received residencies with Page73, Powerhouse, NTI at the O’Neill, SPACE on Ryder Farm, and Fresh Ground Pepper. She has her MFA from Sarah Lawrence College, where she was awarded the Lipkin Prize in Playwriting.

Welcome to Kansas and the William Inge Center for the Arts, Gina!

We asked Gina a few questions to get to know her before she arrives in Kansas next week:

Q: What excites you about this residency program?

Everything!  More specifically, being away for an extended period of time.  I’m born, raised, and still in Brooklyn (my favorite place in the world!) and rarely have spent so much time away and am eager for that experience, especially since I spent so much of the pandemic in one place.

Q: What are you working on right now?

So many things!  I’ve got a few projects that are more concrete with deadlines that I can’t really talk about, am rewriting a bunch of plays and just started writing a brand new one.  I had called this past year the year of rewrites because I’ve written almost 40 plays and felt like I should give time, attention, and nourishment to those before diving into something new.  But now I’m eager to write new ones – alongside continuing the act of rewriting the others, of course.

Q: How do you dream of audiences describing a “Gina Femia play”?

Here’s some statements I’d love to overhear from an audience while they’re walking out of a play of mine:

“I hadn’t thought about sex and sexuality like that before but yeah, that makes sense!”

“Wow, that was really sweet but kinda weird!”

“I laughed so hard but also cried just as hard?!”

“Lots of big, powerful monologues in that!”

“Those characters felt so human to me!”

Q: What is something that is bringing you joy these days?

Reading novels!  HUGE bookworm over here, and here have been some of my favorites: In The Dream House by Carmen Maria Machado, Zami: a New Spelling of my Name by Audre Lorde, Dominicana by Angie Cruz, Yolk by Mary H.K. Choi, Hamnet by Maggie O’Farrell, We Play Ourselves by Jen Silverman, Filthy Animals by Brandon Taylor and Jonny Appleseed by Joshua Whitehead.