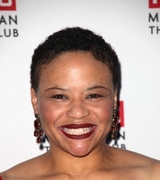 Caroline Clay (she/her) – SAG-AFTRA, AEA is an actress, director, educator, playwright, and vocal coach. On Broadway, she has appeared in Tony Award-winning productions, including: The Little Foxes, Doubt; (Broadway. & National Tour) The Royal Family, and Drowning Crow. Her extensive film and television credits include: the role of “Cece Colvin, The Matchmaker” on Grey’s Anatomy, as well as roles on Shameless, The Knick, Law & Order: SVU, House of Cards, and this season’s ABC premiere of United We Fall. A native Washingtonian, Clay is a graduate of the Duke Ellington School of the Arts, the University of the Arts in Philadelphia (BFA-Theatre Arts and earned her MFA in Performance at the University of Maryland. She also teaches Acting/Voice workshops and intensives in higher education and the corporate sector. Clay received the NAACP 2020 Award for Best Actress in A Play for the role of “Faye” in Geffen Playhouse’s  production of Dominique Morrisseau’s Skeleton Crew. Clay is currently Associate Professor of MFA Acting at the University of Iowa, School of Theatre Arts.