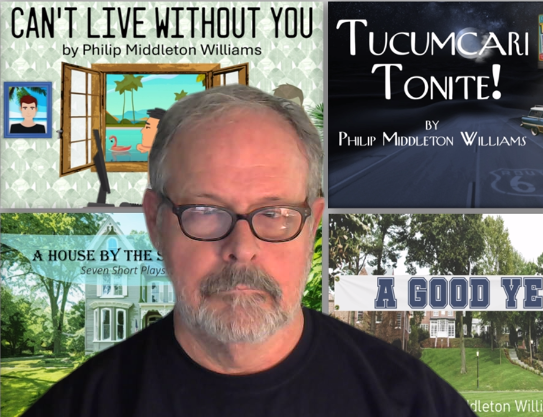 Dr. Philip Middleton Williams (he/him) has written over sixty plays ranging from full-length to one-minute, including Can’t Live Without You, All Together Now, All Together Again, All Together At Last, Welcome to the Family, Dark Twist, Ask Me Anything, A Moment of Clarity, A Life Enriching Community, Cooler Near the Lake, A Tree Grows in Longmont, Tucumcari Tonite!, Chewie, Get Us Out of Here, END OF PLAY., A House by the Side of the Road, A Good Year, and The Sugar Ridge Rag, which opens April 28 at the LAB Theater Project in Tampa. His plays are published by ArtAge Senior Resources Center and Next Stage Press and are also available through his website, www.pmwplaywright.com. He is a member of the Dramatists Guild of America. He has a B.F.A. in drama from the University of Miami, an M.F.A. in theatre from the University of Minnesota-Twin Cities, and a PhD in playwriting and dramatic criticism from the University of Colorado. In 1992 he was appointed to the national advisory board of the William Inge Theatre Festival. He has written numerous articles on the works of William Inge and Lanford Wilson and contributed to “The Facts on File Companion to American Drama,” edited by Jackson R. Bryer and Mary C. Hartig. His doctoral thesis, “A Comfortable House – Lanford Wilson, Marshall W. Mason and the Circle Repertory Theatre,” was published by McFarland and Company in 1993. This year marks his 29th trip to the Inge Festival.